What is Narcissistic Personality Disorder? Is There a Cure?

You are here: Home / Diary / What is Narcissistic Personality Disorder? Is There a Cure?

Many are confused between narcissistic “traits” vs. narcissistic personality disorder… as well as exactly what this disorder is about. Can love, patience, and understanding conquer all? Is this curable?  So here’s a clarification…

NARCISSISM: People with narcissistic traits don’t suffer from mental illness or personality disorder. They feel entitled to the best of everything and most interested in gaining power, money and prestige, but unlike those with NPD, they have an over-abundance of self-esteem. Note: It’s actually good to have a healthy amount of narcissism. Healthy narcissism is having realistic self-esteem without being cut off from a shared emotional life.

NARCISSISTIC PERSONALITY DISORDER (NPD): A mental disorder in which a person has an excessive need for admiration, disregard for others’ feelings, an inability to handle any criticism, and a sense of entitlement. (mayoclinic.org) These individuals have low/lacking empathy, resulting in a dimmed conscience and inability to feel guilt or remorse. The emotional part of their brain is damaged… there is NO CURE.

NPD is the type of “narcissist” I’m referring to throughout these posts.

A CLINICAL DIAGNOSIS of personality disorders can be made only by qualified professionals. However, identifying potentially dangerous people is not only for the experts. We all can be negatively affected when we allow these people into our lives, making Awareness & Prevention most effective form of self-protection.

The devastating, yet predictable pattern of a narcissistic relationship

It goes from an “insanely amazingly perfect version of your dream come true love story” to the most unimaginably cold, confusing, and painful horror story in which you end up no longer recognizing yourself. The unsettling thing about this cycle is that it’s not necessarily calculated at every moment in the relationship… but a natural course the narcissistic personality follows.

This is “natural” behavior for the NPD… it’s how their brains are wired.

THEY *UNINTENTIONALLY ABUSE YOU…

#1. Narcissists LACK “emotional empathy” – but they have “cognitive empathy”

Emotional empathy is the stuff that gives a person the ability to connect and feel what another person’s feeling. You understand and acknowledge that other people are their own independent, thinking and feeling human beings. This decreases the likelihood that you’ll want to intentionally hurt others because you can emotionally relate. If you cause pain to your partner, you will likely feel guilt and remorse.

Example: Your friend lost a loved one due to illness… she’s devastated. You can feel her sadness and grief. Even if you cannot personally relate, you are emotionally moved by the magnitude of her suffering. (Analogy: water on sponge)

Cognitive empathy is to logically (not emotionally) understand what another person is feeling.  This means if you hurt another person, you know the person is hurt based only on information you have in your head. If you cause pain to your partner, you don’t think much of it because you are not personally affected.

Example: Your friend confides in you that she had been physically abused  when she was a child. You hear the information given, offer a hollow, “I’m sorry you went through that”… then your mind wanders off to what you’re having for lunch. (Analogy: water on waterproofed block of cement)

#2. Narcissist see others as merely an EXTENSION of themselves…

When YOU were a young child… it was normal to behave as though the world revolved around you with little concern for the needs and desires of others. You also depended on your primary caregivers (parents, grandparents, etc.) for feedback to let you know if you were being “good” or “bad” because you were learning to be your own human.  Eventually, you developed independence and grew into your own amazing person. You have your own thoughts and emotions about yourself and everything around you… and you understand that other people are their own, separate person with their own thoughts and feelings as well.

With NARCISSISTS… the “becoming an individual” part didn’t happen. The emotional part of their brain was numbed-out, most likely due to genetics or childhood trauma (lack of or too much attention), so they grew up with an identity BASED ON approval from people & things that exist only to revolve around them. (Referred to as “sources of supply“).

Studies show narcissists have an emotional age of about six or seven years old. (~ I loved that he was a kid at heart… didn’t realize he literally was one.)

… that even the smallest criticism can shatter (again, due to genetics or childhood trauma). To protect this, they’ve abandoned their “true self” and instead, created this perfectly amazingly indestructibly wonderful fantasy identity that they parade around as. (Referred to as “false self”)

So… when we add them all together:

Identity BASED ON external approval +

An empty shell of a human being that depends on outside feedback to validate his self worth.

Narcs lack emotional empathy, so they’re unable to see other people as separate, thinking and feeling individuals – but a mere extension of themselves that serves a purpose. Their brains are not wired to genuinely care about anyone outside themselves, thus, the ONLY purpose of these extensions (other people, things, events, etc.) is to supply the narc with approval and applause to gage/validate his self worth.

The Target: A source of supply from where the narc draws approval and admiration…

… it’s pretty much anything and anyone that validates his identity and provides him an inflated status symbol.

Narcs are able to maintain long-term relationships as long as there is supply to draw from it. This comes in forms of financial stability (combined income, extended family they can benefit from), a sense of normalcy (spouse, children, pets, domestic partners), and admirable appearance (great dad, “devoted” husband/partner).

This provides the narc with an “enviable appearance” that he is able to feed off of. However, spouses, partners, and family are left with only a detached shell of a person due to the narc’s inability to emotionally bond. (so when narcs claim they come from a “loveless relationship”, it’s based on truth… because narcissists are unable to genuinely love another person.)

(*) Unintentional because it’s how they’re wired. Doesn’t excuse the extensive damage they cause to people who love & trust them with their heart, dreams, and forever.  Also, I understand there are narcissists who are totally aware of how their actions affect the people involved and intentionally harm them regardless… so not always “unintentional.”

Serious damage to self-worth, self harm, and suicide can result from narcissistic relationships. Many suffer from C-PTSD/PTSD, Stockholm syndrome, cognitive dissonance and disassociation, and even misdiagnose themselves with borderline personality disorder because they’re unaware of what was done to them and have no idea how to deal with it…

EMOTIONALLY SENSITIVE & HIGH EMPATHS TAKE CAUTION… Narcs often target these types of people. Emotional empaths care so deeply, they don’t easily give up on people they love = easy extraction of “supply”… so when the narcissist begins revealing his disturbing behavior, a highly empathetic woman will believe she can guide him by giving MORE love, patience, and understanding. Thus, she remains in the messed up relationship and becomes even more bonded with the narcissist.

You CANNOT “fix” them by loving them more.  You CANNOT make them “realize” their poor behavior by being patient and constantly giving them more opportunities to hurt you. The emotional part of their brain that process emotional empathy… emotional bonds… is BROKEN.

THE ONLY WAY TO PROTECT YOURSELF IS PREVENTION. – Familiarize yourself with signs and characteristics that identifies people with this disorder. Establish and defend strong personal boundaries – regardless of outward appearance, charm, level of success, etc. – to avoid this nightmare in the first place.

Note: I will be referring to narcissists in these posts as male because that’s how it applies to me. However, NPD can also be found in females.

This is my story…

Intro: WHAT THE HELL JUST HAPPENED?

P.S. Lemme know what you think!

Carmen is a mom, life strategist, religion teacher, best selling author, advice columnist, foodie wannabe, and advocate for victims of narcissistic abuse. She is currently living la vida loca in Vegas with her not-so-little human… prepping him for med school while pseudo-adulting, Tahitian dancing, and exploring the delicious world of bubble tea *woo!*

Sushi Burrito with Ahi Tuna, Seared Salmon, Crab, and Avocado
Next Post: My 20 Month, Long-Distance Relationship with a Narcissist NPD 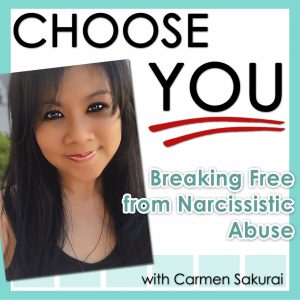 Adulting 101: A “support group” for grown ups to help you do life without burning out or setting things on fire.

Disclosure: ItsCarmenTime.life is a participant in the Amazon Services LLC Associates Program, an affiliate advertising program designed to provide a means for sites to earn advertising fees by advertising and linking to Amazon.com.

Any cookies that may not be particularly necessary for the website to function and is used specifically to collect user personal data via analytics, ads, other embedded contents are termed as non-necessary cookies. It is mandatory to procure user consent prior to running these cookies on your website.